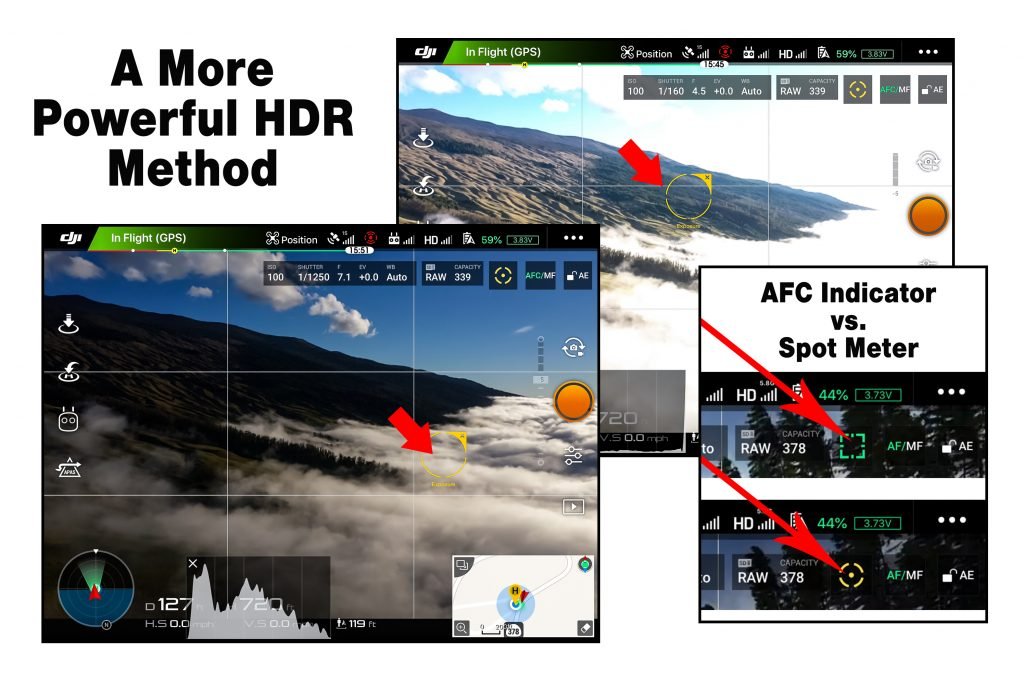 Compared to the Phantom 1 days, we drone operators now have so many tools to work with! Serious aerial photographers are especially excited to have two competent drones that allow complete control over the three variables of the exposure triangle. Both of these drone cameras also have a relatively large 1-inch camera sensor. These drones are the DJI Mavic 2 Pro, and the DJI Phantom 4 Pro V2.0.

Despite the drones being listed as consumer-level, a photographer with experience can certainly use either of these quad-copters for professional-level work.

Not many people are aware that there is a wonderful little tool incorporated in the Mavic 2 Pro and Phantom 4 Pro V2.0 drones. The tool is hidden in the DJIGo4 app. It is called the spot exposure meter. 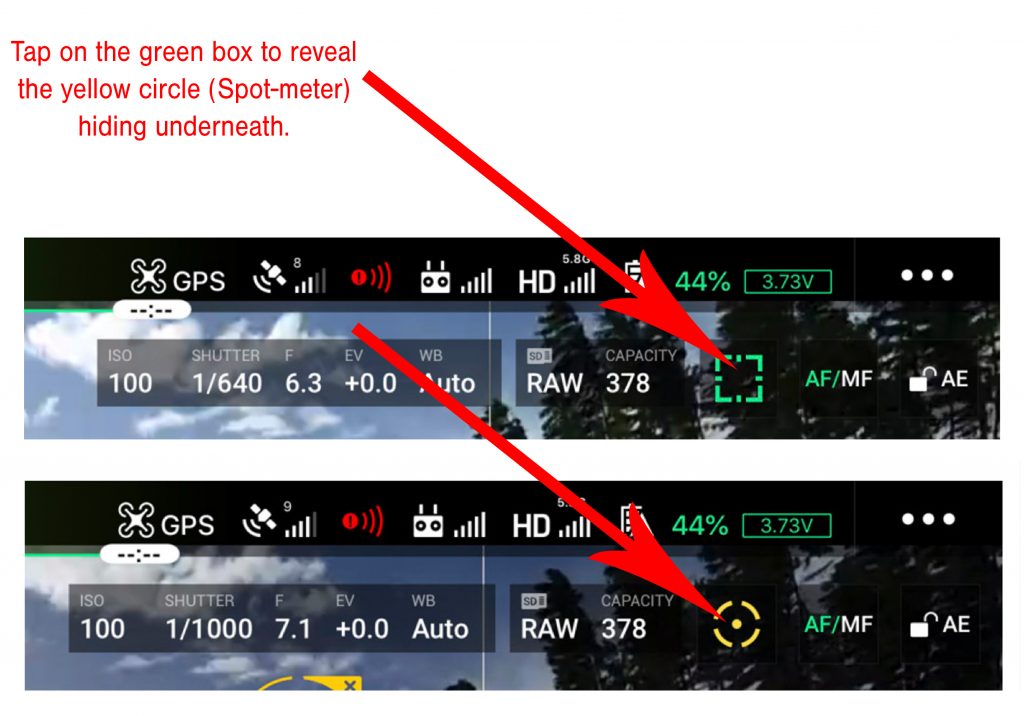 Tucked away under the green auto-focus continuous indicator icon,  on the second row of camera info icons, is the spot meter tool. Tap on the green box to reveal the yellow circle. This is your spot meter.  Now tap anywhere on your viewing device. Watch the exposure change, depending on where you place the yellow circle. 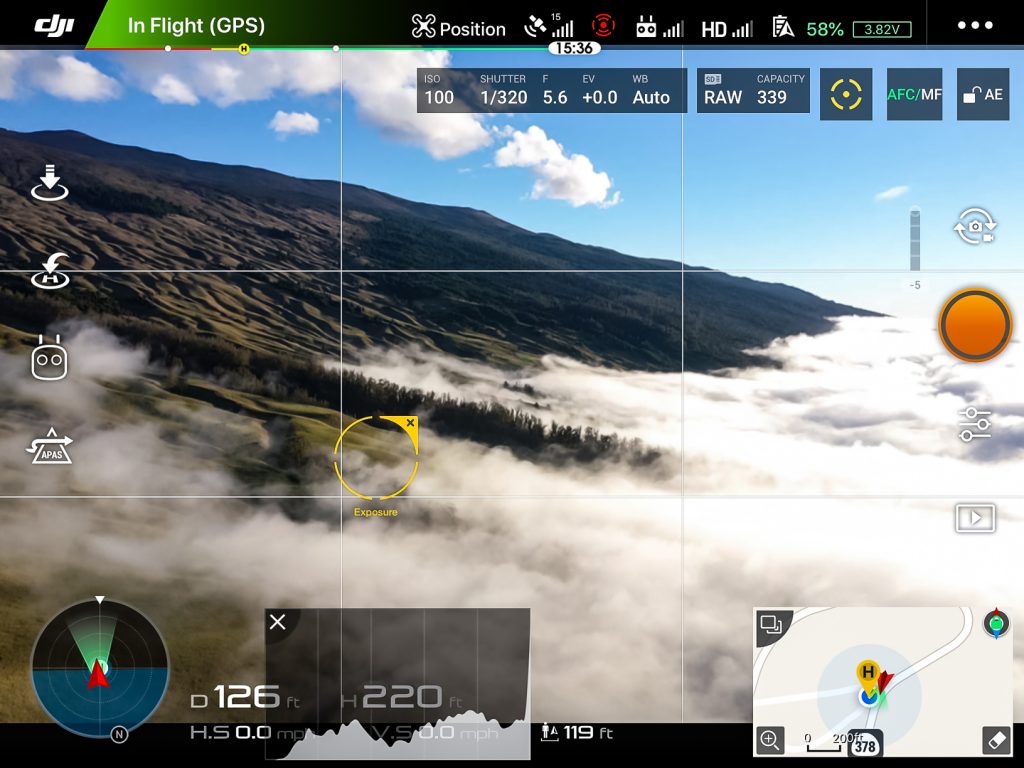 A spot meter reads the brightness of a particular spot within your camera’s frame. The field of view for your spot meter is approximately 5º. Regardless of the exact field of view, this function allows us to work quickly; jumping between tap-focus, and tap-exposure as necessary. This tool also allows us to select the spot for which the camera will set its exposure. Keep a couple of things in mind when trying this valuable tool:

Why is this spot-meter so valuable?
1) We can expose for the subject, by quickly overriding the default center-weighted average metering.
2) We can create a manually bracketed set of exposures to process later as an HDR (High Dynamic Range) image.

Let’s expand on these scenarios:

Exposing for the subject
Exposing for the subject can be tricky when your camera’s light metering system is trying to average the entire scene. A high-key scenario (or overall bright scene) will result in a backlit subject. The subject, being a small part of the overall image, will appear very dark, being underexposed.

Create a manually bracketed set of exposures for an HDR image
An HDR photo is created by merging a bracket set of exposures into a single image. The process requires tone-mapping software. Adobe Lightroom, or Skylum Aurora, or HDRSoft Photomatix are all capable. This technique helps the photographer manage unruly lighting situations – situations where the range of light is too broad for the camera’s sensor to capture. 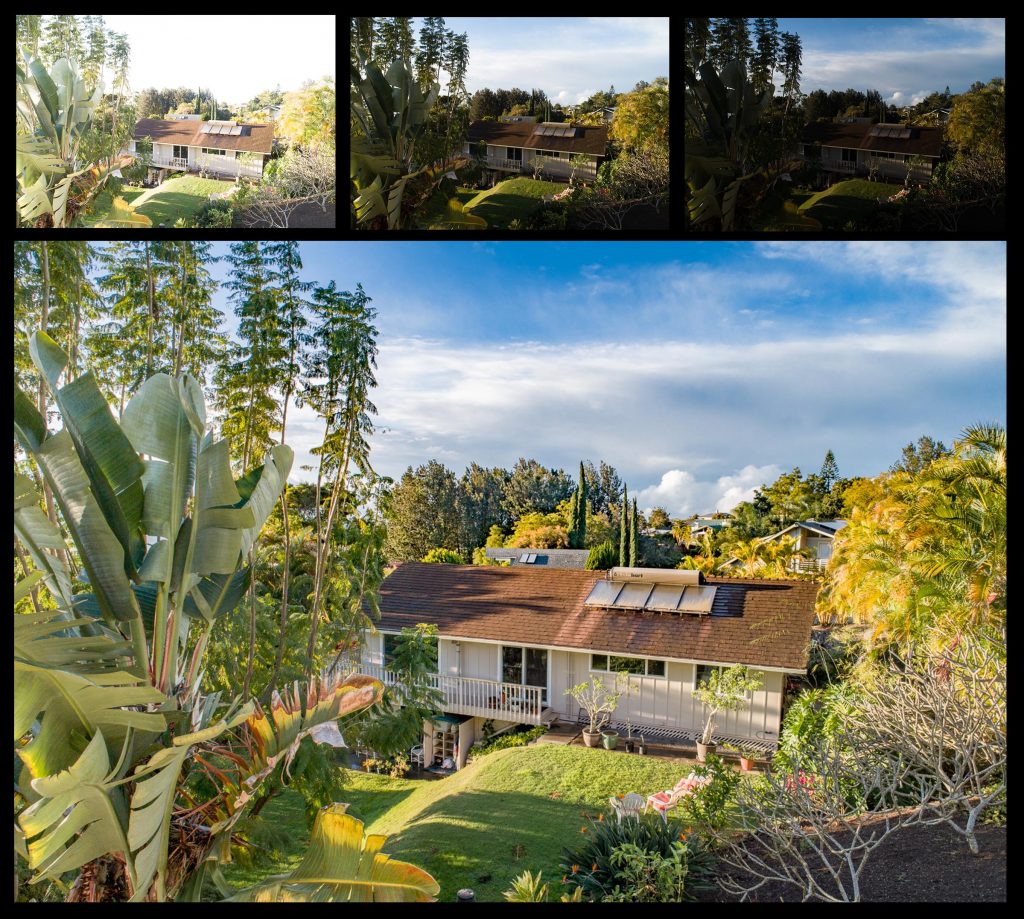 What you see with your eyes is not the same thing that your camera will capture. Your eyes can detect a range of approximately 24 values of light from pure white to pure black. Our small drones generally capture and record one-third of this 24 E.V. dynamic range of light. Bracketing a series of exposures and merging to HDR is the standard workaround.

So when would you use the HDR process? When there are extreme highlights and deep shadows in the same scene. Shooting into shadow areas in the middle of a bright sunny day would be a typical situation where a photographer might incorporate HDR techniques. 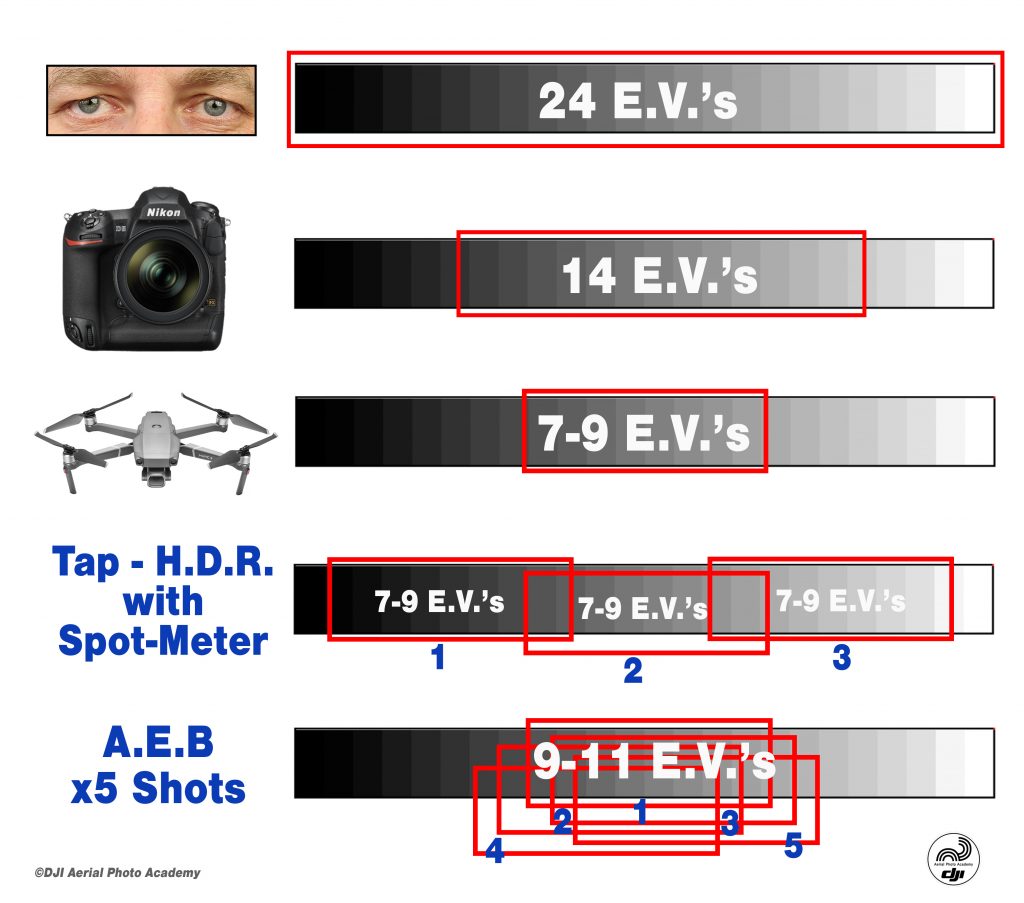 The DJIGo4 app offers us the auto-exposure bracketing (AEB) mode. Kudos to the engineers for that. However, the AEB range is not broad enough to create a satisfactory HDR image. We are given a choice of 3 or 5 bracketed shots (captured in rapid sequence while the drone hovers).  The separation between exposures is not wide enough to cover the range of light typically needed to cover most HDR scenarios. The DJIGo4 app gives us a bracket of -0.7, 0, +0.7 exposure values. Or when bracketing five exposures, -1.4, -0.7, 0, +0.7, +1.4 EV’s. Honestly we really need a range of -3.0, -1.5, 0, +1.5, +3.0.

Well, taaa-daaah! Using the spot meter tool can get you to that wider bracketing range!

Our drones are so stable in the air now that they rival a tripod. This stability gives us the confidence to create a manually bracketed set of exposures, which takes a few seconds longer. We are no longer afraid that the drone will drift, resulting in misaligned images.

So, when hovering over a harsh lighting situation:

In fact, two photos will work in most instances. The more photos you throw into an HDR, the more noise/artifacts will be introduced into the final image. Keep it simple when you can. 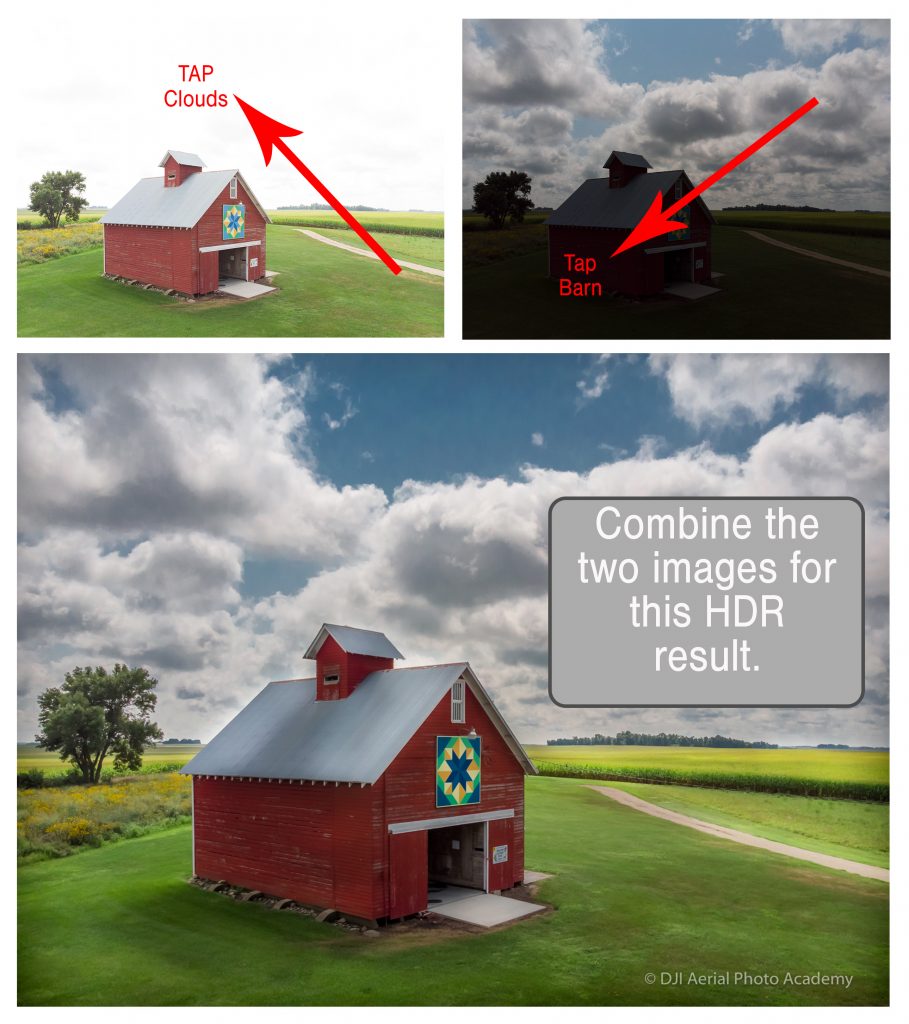 That little green box in the DJIGo4 app is hiding a very useful tool. Get out and try using the spot exposure meter during your next flight. Keep it open when you are trying to work quickly or want to create your next bracketed HDR image. 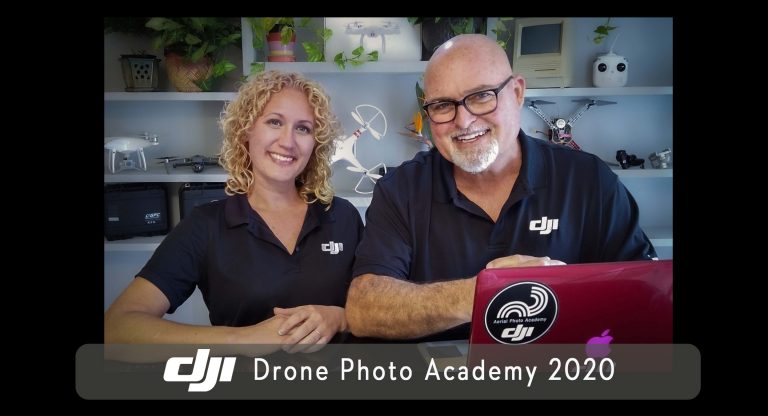 Authors Randy Jay Braun and Stacy Garlington are co-founders of the DJI Aerial Photo Academy, providing live city-to-city workshops helping attendees to create better aerial drone photographs for work or for play. A current workshop schedule can be found at www.djiphotoacademy.com and on their facebook page.

Due to the COVID-19 pandemic, face-to-face classes are currently very limited to small groups. They hope to resume full-sized classes in Q2 of 2021.

A book about Aerial Drone Photography? Yep. These two have energy! Randy and Stacy have just laid down the outline. There will be a nicely discounted price for every person on the MailChimp list. Chaaa-ching $$$$$.

Until then, HECK YEAH, Randy & Stacy are teaching the same course (and more) to you as you sit in your LazyBoy chair at home. This is a bargain because you get a full six hours of bite-sized lessons that you can digest whenever you want. Take a look at our online Premium Masterclass.

Learn Aerial Photography Online
See Which Cities We Will Visit Next 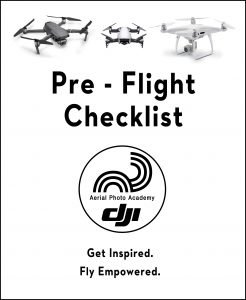 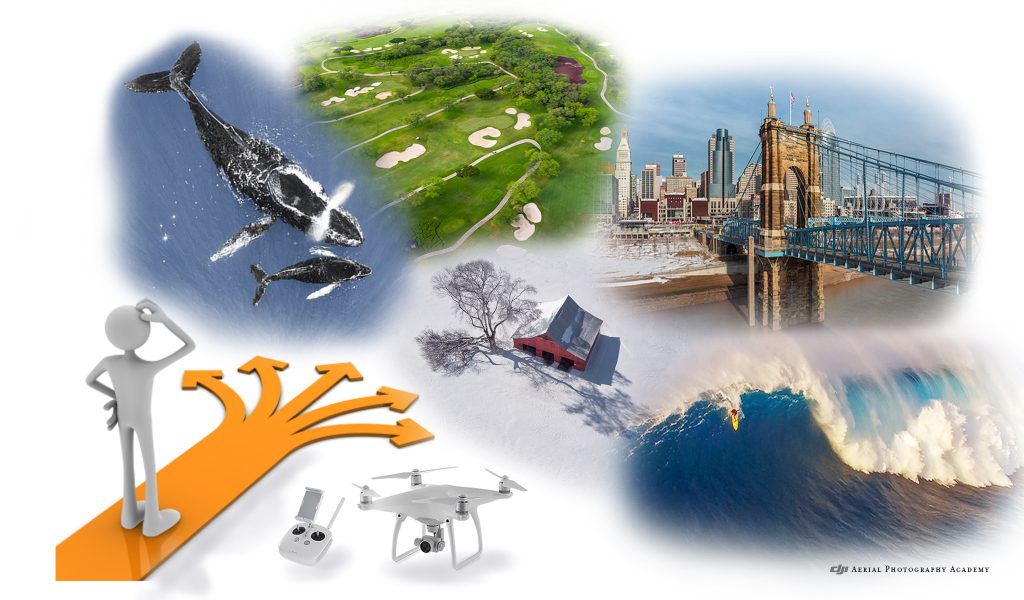 Develop Your Niche with Drone Photography 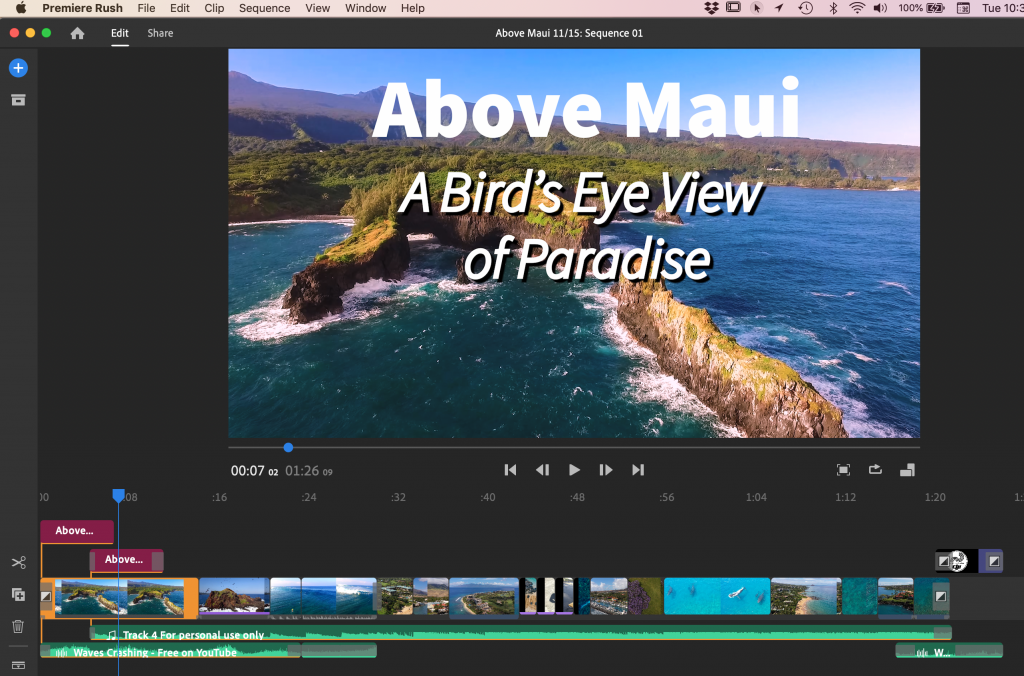 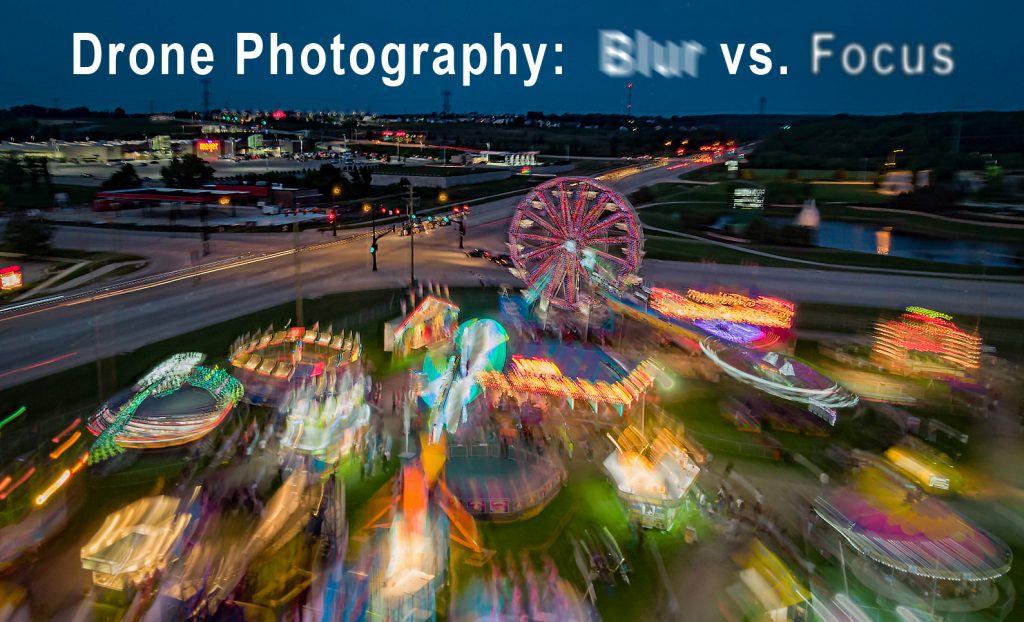 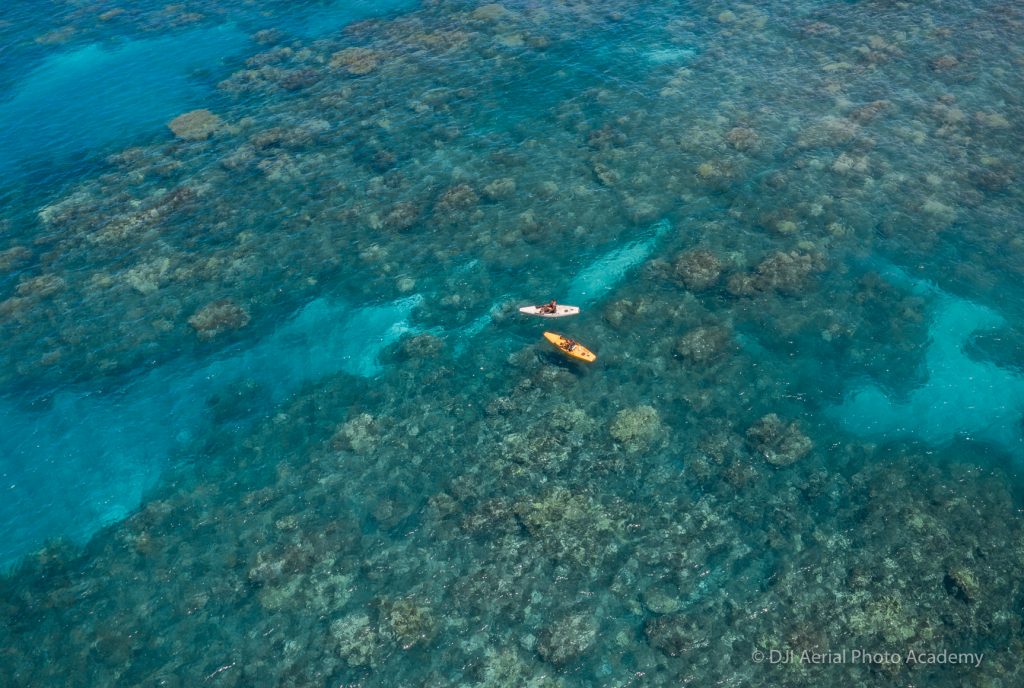 Photographing Water from Your Drone Above